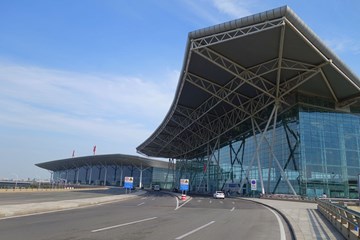 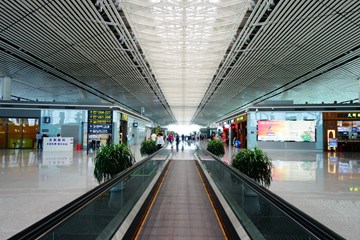 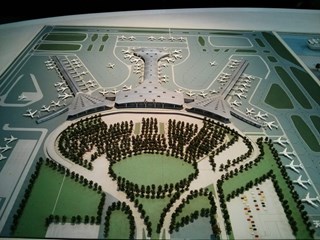 In 2004 as consultant for NACO Airport designers, Kohn Pedersen Fox Associates and ABT joined the international competition for the design of the new terminal for Tianjin Binhai International Airport. The airport was expanded ahead of the 2008 Summer Olympic Games in Beijing. The team developed a concept for the expected 6 million passengers at the time of the Olympics, with subsequent phases that will expand the facility to accommodate 40 million annual passengers over the following decades. The shape of each terminal module—triangular in form with lower wings on either side— would allow for an incremental expansion of the parts that would ultimately knit them together to create a cohesive whole. The design was awarded first prize, and was further developed and build by the Chinese to be opened in 2007.
ABT designed the structure of the triangular roof, representing a gigantic kite. Tianjin is the birthplace of the kite, considered one of the first flying machines, and with the terminal, the designers looked to achieve the same lightness of structure as a kite. With lightweight steel trusses stiffened by cables making use of the curvature for spatial effects, a very lightweight structure with large spans was developed, that also benefits from the kite techniques.
Edit public page

Company only pages are only available for project partners of a project. Since you are not listed as a project partner, you are not able to access this company only page.
Did your company worked on this project? Go to the Public page and list yourself as a project partner to access your company only page
Uploading a picture is currently only possible if you worked on this project and your company is listed in the team.
You're now following Tianjin Binhai International Airport. Click here to see everything you're following.
You stopped following Tianjin Binhai International Airport
Project added to your favorite projects. Click here to see your favorites.
Tianjin Binhai International Airport is removed from your Favorites 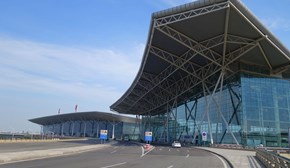