Your browser is not supported. Please contact info@galleo.co or try another browser.
Feedback
Public page
Company only
Project language: 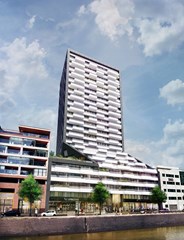 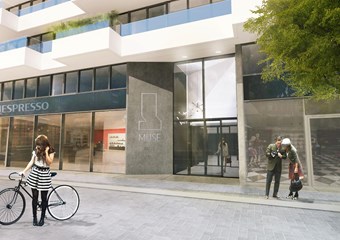 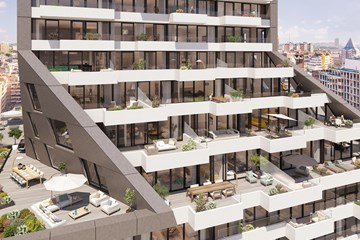 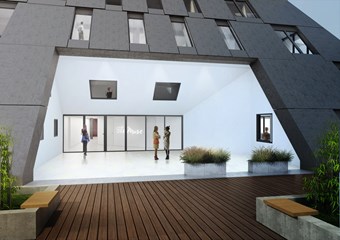 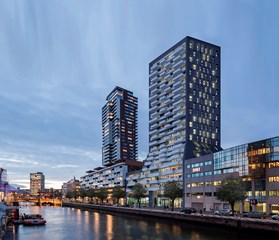 The Muse, the new luxury residential tower in the Waterstad quarter of Rotterdam, will contribute to shaping an important pedestrian axis in this steadily developing part of the city. Its design emphasizes the connection with the street by featuring street-level commercial functions and a double-height lobby, and by placing residential units near the ground floor. In recent years, numerous high-profile developments have been built in the Waterstad quarter of Rotterdam, including Markthal, the Citizen M hotel, and the 100 Hoog tower. As well, several upcoming towers are planned to be built just south of the Red Apple. Within this up-and-coming district of Rotterdam, the Wijnhaven street, where the new tower will be built, has the potential to grow into a lively pedestrian route given its strategic position as a connector between the Oude Haven (Old Harbour) to the east and Witte de Withstraat – one of the busiest pedestrian streets of Rotterdam with cafes, restaurants, galleries and shops that ends at the Museum Park – to the west. To establish a close connection with the street, the tower’s ground level commercial functions have fully glazed, transparent facades. Towards the center, the facade bends in to mark the double-height residential entrance, framing it with a pair of dark concrete walls that contrast with the tall, transparent and bright lobby. Immediately above the shops are three levels of parking. To avoid the unpleasant and alienating atmosphere associated with parking structures that open onto the street, a line of apartments occupies the south façade. Their windows and staggered balconies communicate with the street and give it a human scale. Between the fifth and eighth levels, the building volume bends to the west and to the north, giving space between itself and the future tower to be built on the adjacent plot at Wijnhaven 65. These two towers will be coupled, and will share a large terrace on the fifth level. A secondary lobby will give access to this urban roof garden, and to a common fitness centre in the Wijnhaven 65 tower. The Muse’s bending gesture, as well as giving light and space to this shared terrace, also unifies the plinth and tower into one sculptural element. The result is a bold and recognizable silhouette, which is emphasized by a dark grey concrete ‘wrap’. The residential units themselves offer high-end housing with generous exterior spaces, qualities that are generally lacking in Rotterdam’s housing market. They primarily target middle and upper class young couples, as well as the growing demographic group of “empty-nesters”, offering a variety of housing typologies. Levels 1-4 have smaller south-facing units (40-120m2) that have a direct relationship with Wijnhaven. The units on the 5th-8th are more spacious (100-180m2) and are terraced, offering generous exterior spaces with abundant daylight. Levels 9-22 have units between 90m2 and 140m2. The apartments are flexibly designed, giving buyers the choice of creating a larger bedroom or bathroom, or exchanging one of the rooms for a larger kitchen. The top level of The Muse features two luxurious penthouses, each with a private courtyard open to the sky and panoramic views to the river and the city. Each unit has a spacious balcony with a varying depth that gives privacy from neighbours. The deep and narrower parts of the balconies are staggered with respect to the levels above and below, so that each balcony is partially double-height, optimizing sun conditions for the interior. The balconies face south towards the river, and north towards the city. The east and west facades, in contrast, are sheltered by the dark ‘wrap’ and have smaller openings, ensuring visual privacy from the neighbouring towers.
Edit public page 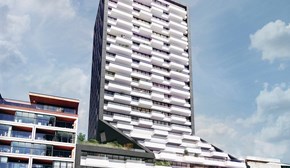