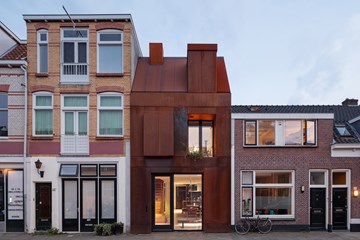 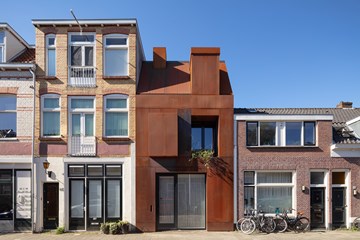 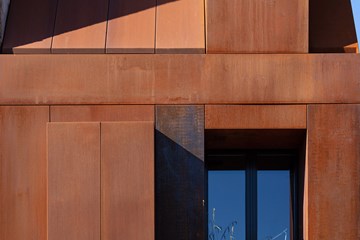 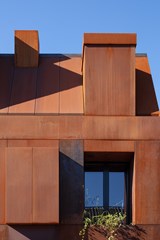 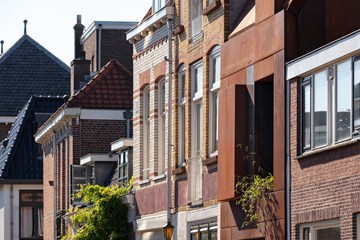 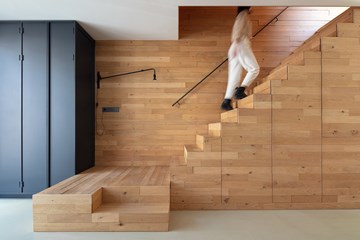 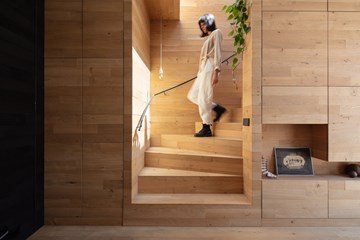 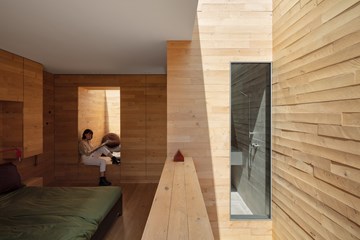 The Steel Craft House is a fine example of self-building. In a period of ten years, a former garage was converted into a wooden residence with a Corten steel façade. It was a challenging task where good cooperation, perseverance, and love for the craft led to an incredible end result. Zecc designed the façade, the clients realised the entire project themselves with the assistance of befriended craftsmen. Every steel sheet and every oak slat literally passed hands several times.

In the Steel Craft House, the stylistic features of a working-class house were revamped. The residence strongly stands out in abstraction and material, but it is in keeping with the adjacent buildings through shape, composition, and detail. Features like the characteristic façade layout, the roof cowl with dormer, and a chimney were translated in the steel cladding. Stylistic elements like a plinth, alternating stone bands, brick-on-edge courses, and cornices can also be found in the steel sheet pattern.

The windows in the new façade all have their own character, anticipating the function that is housed behind them, but jointly form an abstract composition. At the street level, a transparent recessed front was chosen, which had already been present in the façade appearance, and this way it is more in keeping with the neighbouring buildings. The ‘bay window’, shaped as a cantilevering enclosed surface at the location of the bathroom, provides for privacy. A small air gap was made at the top. The second surface on the first floor is a mini loggia / French balcony, behind which the living room is located.

Behind the hard, occasionally somewhat closed steel façade, hides a soft and light residence. The interior is formed by a sculptural piece of ‘furniture’ in oak over three building layers. Extra daylight enters via a patio and several skylights. For instance, the dormer was equipped with a light dome, and in the bathroom the light enters via a small air gap in the ‘bay window’ of the front façade.

With its characteristic façade, the Steel Craft House stands out from its surroundings, but simultaneously, the reference to the recognisable theme of the working-class house ensures that the modern residence integrates with the surrounding buildings. Not just this reference but the expression of craftsmanship – which makes this district so beloved – contributes to the integration, too. The appearance of the steel has a paradoxical quality. At first glance, it contrasts with the brick neighbouring buildings, but at the same time, it is beautifully in keeping with them because the discolouration of the Corten steel refers to the patina of the archetypical Dutch brick. The choice for Corten steel was also made out of love for this material; the client of the Steel Craft House is a steel artist working in Utrecht (Staalstudio). 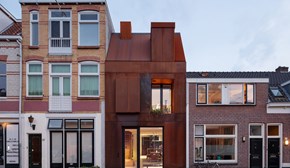