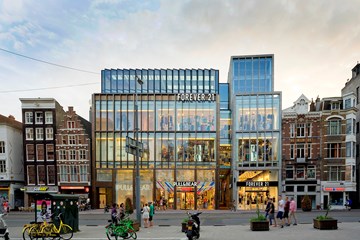 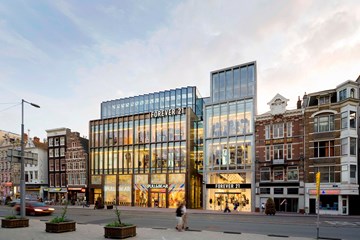 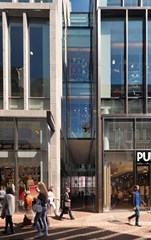 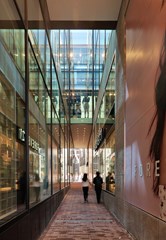 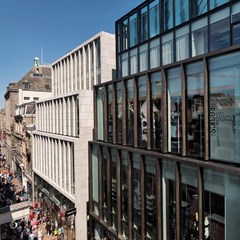 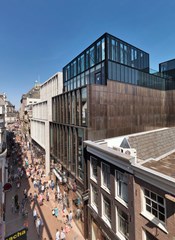 The original urban development structure of the location is a medieval strip parcelling from the dyke to the dock quay, with houses being erected along both the street as well as the quay. The plots of the side streets were mostly divided into smaller plots meant for renting out small confined single-roomed homes. There wasn't enough space in the narrow building strip for an inner courtyard. Rokin Plaza was originally built as a Polish coffee house by architect Offenberg in 1861. The coffee house along Kalverstraat is situated at the corner of Papenbroeksteeg where two plots were merged in the nineteenth century. The expansion of activities with a hotel-café-restaurant on the Rokin side (1890-1893, arch. Ed. Cuypers) - after demolition work - resulted in the joining of four plots along the quayside and the smaller plots along Papenbroeksteeg. A fifth property on the Rokin side was added later and became known as the Poland Hotel. The architecture of the old premises along Kalverstraat was adapted to the new addition. In May 1977 a fire destroyed the complex after which architect Han Lijnkamp (Bureau Gerard de Klerk BV) designed a new building which also incorporated a plot across the road in Papenbroeksteeg (Kalverstraat 11/Rokin 12). The complex became known as Rokin Plaza, probably because of the tiny square in the courtyard which could be reached via Papenbroeksteeg. Named after the designer, the complex was known as the ‘Han Caves’. The historical context was largely ignored in the new design. The rhythm of the dormer windows follows a different rhythm to the shop fronts and the grouping of window axes is irregular: three-three-two-four-(alley)-four. The leap across the alley in the same design is a denial of the historical urban design context and the introduced plaza also breaks with the existing structure. In the current design a choice was made to take the bare concrete skeleton as the starting point. The deviating dimensions in the façade and the urban development structure has been restored to its original 19th century design. The plinth is implemented at a double height along both Rokin and Kalverstraat and the “plaza” which was added at the end of the 20th century has disappeared from the design. The two building layers above the plinth connect to the adjoining premises whereby the topmost two floors have been set back. The glass façade over both volumes is finished with an identical grid, though the original plots are emphasized by a varying use of materials of natural stone and bronze. As a result of the radical refurbishment it was possible to bring back a piece of historical context in the inner city by way of a contemporary building.
Edit public page 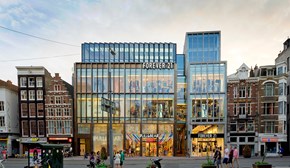