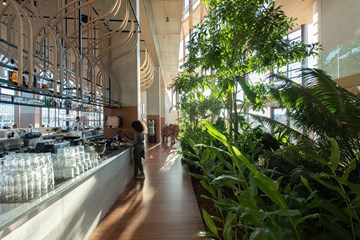 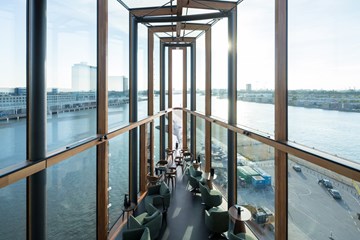 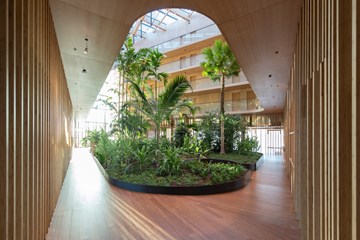 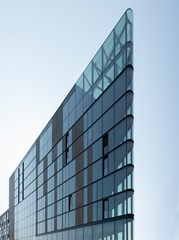 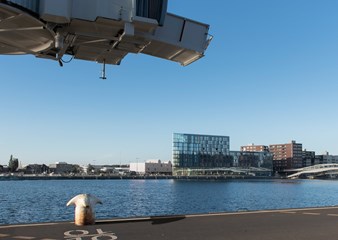 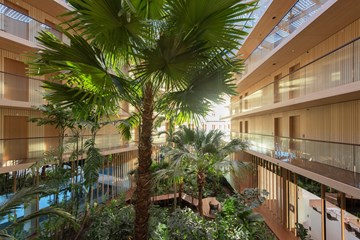 HOTEL JAKARTA is an energy neutral building and BREEAM Excellent certified with 200 luxurious hotel rooms and a sky-bar, all offering stunning views over the river IJ. Unique for the Netherlands is its 30-m high load-bearing timber structure. All the beams, columns, ceilings and window frames are made of natural, FSC or PEFC certified timber. For 176 of the 200 hotel rooms SeARCH developed 4-star luxury wooden prefabricated units of 30 m2. All were placed on site within 3 weeks, reaching a height of 30 metres above the quays of Java Island. SeARCH translated structural and architectural requirements into a clever design where thin high-quality prefabricated concrete floors are combined with cross-laminated structural wooden walls and ceilings. Each room fitted on a standard truck, and was delivered to site fully equipped with a passive façade, balcony and complete bathroom for plug-and play, including all necessary technical installations and interior finishes.

HOTEL JAKARTA’S south and east façades are covered with Building integrated Photovoltaics (BIPV panels). The 350 PV panels - over 700m2 in total – are fully integrated into the loggias design. The glass rooftop covering the atrium also contains BIPV cells that, simultaneously collect energy and function as sun shading for the subtropical inner garden.

An atrium with the subtropical garden is the center of the hotel. It acts as a temperature regulator in both summer and winter. On every side of the building rooms have their own private covered exterior space which functions as structural shading. The single layered glass curtain of these balconies buffers noise and protects from the harsh winds of the sites exposed position at open waters.

Above the IJ at the highest point in the triangular building, the sky-bar is fully enclosed in glass. Its tip is a curved double-layered glass with an outer radius of just 600mm. Its roof is made of triple-layered glass. Both façade and roof are brought together via a very subtle glass-on-glass connection, allowing the internal timber curtain wall construction to be visible throughout.

HOTEL JAKARTA’s east and north façades are covered with anodized aluminum panels, each with their own unique perforation pattern that combines ancient trade ship illustrations from Amsterdam’s “Golden Age”.

HOTEL JAKARTA symbolizes Amsterdam’s historic maritime connection with Asia. It is built on the quay where until the mid-20th century, immigrants would arrive after a long trip from Indonesia. For many families, the tip of Java Island was their first or last view of Amsterdam.

The 4-star hotel houses a dynamic public space with various bars, restaurants, coffee corners, a wellness centre and cultural activities, all built around the central subtropical garden. The design and maintenance of the subtropical garden is a result of a collaboration with the Hortus Botanicus and completes the series of gardens on the island. The Royal Tropical Institute is assisting us with the cultural planning. By terracing the ground floor plinth the hotel is publicly accessible on all side through the transparent façade. SeARCH designed Hotel Jakarta as a truly public building. It is a lively cornerstone of the city and a second living room to both the curious globe-trotter, the neighbours of Java Island and the wider inhabitants of Amsterdam. 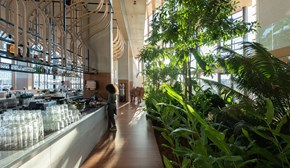