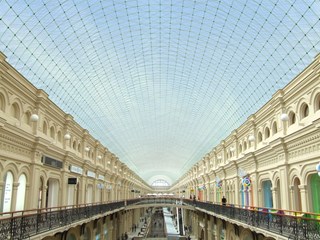 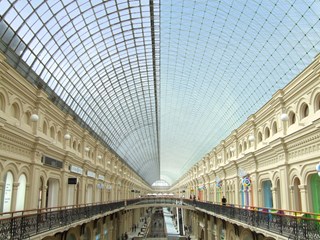 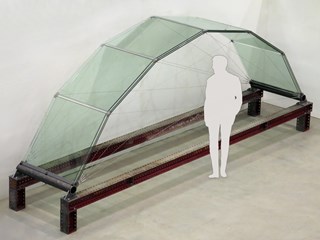 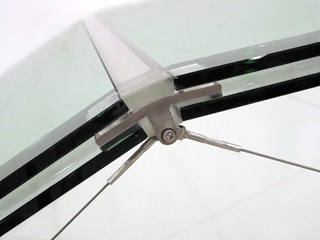 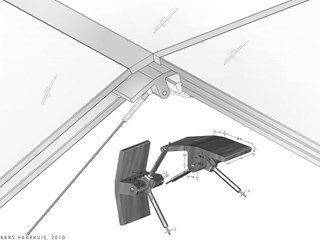 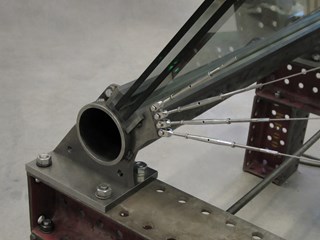 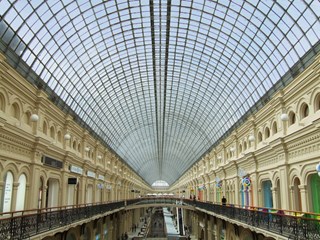 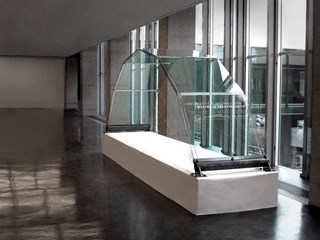 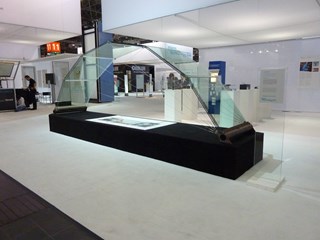 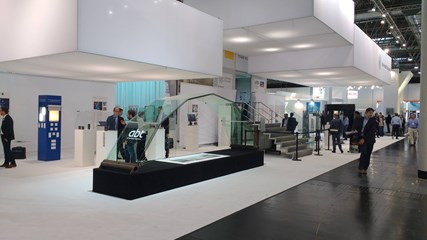 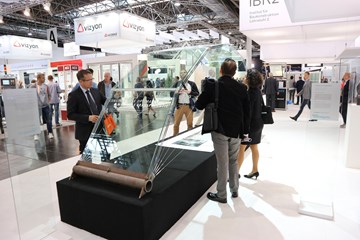 This innovative roof system has been developed specifically for barrel-vaulted roof structures, aiming at maximum transparency due to structural optimization. The development was the graduation research of Kars Haarhuis (ABT bv) and has led to a glass structure with small connections, integrated into the glass, as well as clear, transparent polyurethane joints. The development was started on the condition that flat, rectangular glass panes would be used. Furthermore, based on possible future designs, supports along its full length in axial direction could be assumed, leading to a structure which consists of a series of connected arches. In order to stabilize this system, a structure developed by Vladimir Shukhov turned out to be the most interesting option for further research. This structure is stabilized with cables, connecting each joint of the structure separately to the supports. All connections in the structure are hinged. In stead of transferring all forces in a single connection, suggestions were made to transfer normal and shear forces separately. As a consequence, normal forces can be transferred by pane-wide transparent polyurethane parts, distributing normal forces over both the surface of the polyurethane and the glass edge. This leads to exceptionally low normal stresses. In addition, shear forces can be transferred by small steel elements, to which the cables are connected. These elements can be considered as 6 mm thick rectangular shaped steel parts of about 60x90 mm2, located between the top layers of a triple laminated glass element. Stresses within the steel elements and the glass panes remain limited, due to relatively small forces within the cables. In order to avoid any movement of the steel elements, as well as to connect the cables, the elements have been designed in a T-shape. The perpendicular part of each element extends barely 10 mm underneath the glass surface, leading to an optical almost flat surface at the inside of the structure, without any obvious irregulari-ties nearby the connections. While the cables measure just 3 mm in diameter for spans up to 20 meters, only the glass structure and steel connections will be visible at the first glance. Together with the small steel elements and the transparent joints, the structure offers a unique degree of transparency. Post-failure structural capacity is ensured by positioning the steel elements on the corners of four glass panes. In case of failure of one glass element, forces can redistribute to adjacent intact glass panes. The broken glass will remain in position due to adherence to the interlayer and the use of annealed or partly toughened glass. Fully tempered glass is not required, as a result of low tensile stresses in the structure. In order to obtain these stresses, a parametric finite element study has been conducted, leading to optimum dimensions and an optimum selection of materials. Based upon this study, a PVB interlayer was preferred over more stiffer interlayer materials. Subsequently, numerical analysis based upon the optimized model showed bending stresses up to 7 N/mm2 can be found in the glass by an arbitrary span of 5 meters in case of eccentric snow loading, using 888.4 laminated glass. These stresses increase up to 25 N/mm2 by a 15 m span under equal loading conditions. Critical stresses occur at the bottom glass pane, which tends to ‘peel off’ from the upper glass panes. As a consequence, bending stresses in the glass are caused, which also trigger peel stresses in the lower interlayer. Although actual peel strengths are unknown, the calculated values remain limited to an acceptable degree. Due to slightly prestressed cables, the system stiffens substantially. Hence, system displacements remain very low: Both experimental and numerical results showed displacements of 2,5 mm, about 1/2000th of the total span, obtained by a 5 m span and eccentric snow loading. Based on this span, a full-scale test has been performed. At the expected critical locations, test results showed an average stress just 1% lower than initially calculated. However, at other locations higher stresses were measured, as a result of incorrect prestressed cables. These were caused by an attempt to equal calculated prestresses exactly, leading to a permanently, non-correctable deformation and higher tensile stresses in the glass panes. Similar complications can be avoided in the future, by using a prestress margin of 25%, effecting just non-critical stresses in the glass. This means initially desired spans of 20 meters could become reality someday for this structure. The prototype of this arch has build at Eindhoven University of Technology in 2010 and demonstrated at Glasstec 2016. More information: k.haarhuis@abt.eu
Edit public page 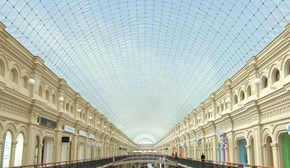