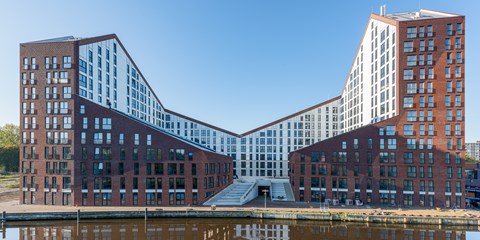 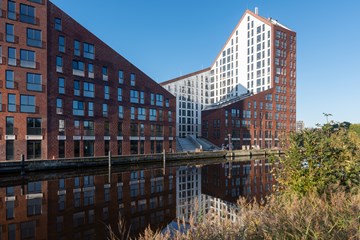 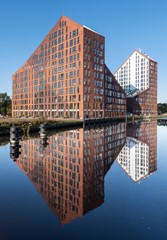 Features are not highlighted just for the sake of it. They can be the result of shrewd planning. Just like the 435-apartment student residence in Groningen, which is already very striking due to its size and height of 15 storeys. The building is an unmistakable focal point in the cityscape because of its unusual angularity. The design was driven by financial and ecological factors as well as the quality of life: high points at the north and south ends of the building create space for apartments and increase the housing density. The lowered roof edges in the west allow plenty of natural light into the apartments, a necessity for this level of building density. In addition, the closed west-facing side acts as wind protection for the courtyard and the canal banks, while the hollowed out east-facing one provides a view of Groningen. The outer brick façade refers to typical Groningen red brick houses whereas the façades overlooking the courtyard are clad in white ALUCOBOND® elements which diffuse natural light into both the courtyard and the apartments. Mounted on the large, sloping roofs, which are exposed to the maximum amount of sunlight, PV (photovoltaic) modules generate plenty of energy. Clearly, technical principles have influenced the building design, but regional building culture has also been emphasized and, like every good highlight, a sense of identity has been created. If you travel to Groningen by train from the north, the first things to catch your eye are the pointed sides of the building, reminiscent of historic mercantile buildings. Close behind is the expanse of the sides, which have brickwork patterns reminiscent of old grain silos. The contrasting colours on the façades emphasize the different heights of the roofs and the volume’s density. Seen from the banks at the other side of the canal, the result is a collage of sloping roof edges. This collage echoes the densely packed, sometimes tall, sometimes small houses in the old town of Groningen. 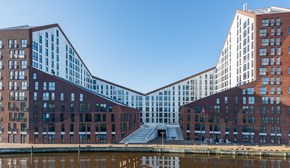