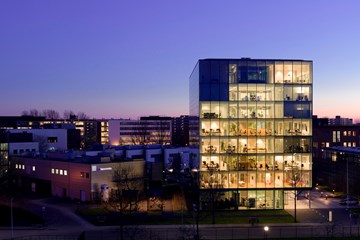 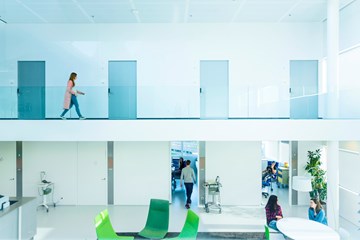 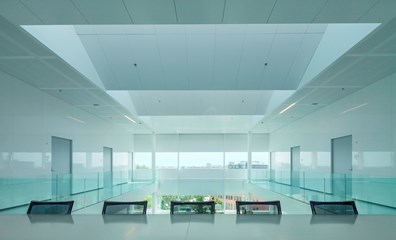 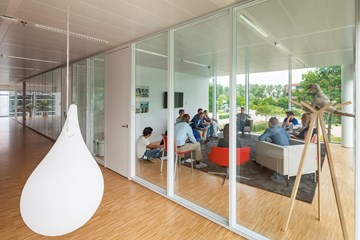 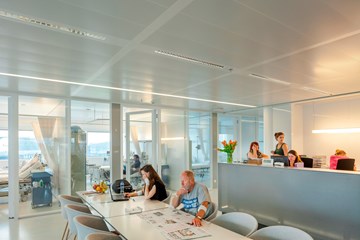 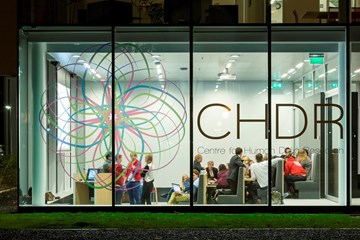 In the mid-1990s, cepezed designed an eye-catching company building for the Centre for Human Drug Research (CHDR), which tests the working of medicines and their side effects. Despite the construction of an extension, the firm was beginning to burst at the seams. A new building has now risen beside the existing one in the Bio Science Park in Leiden, where cepezed has also realized various accommodation for other pharmaceutical companies. The new building consists of a volume measuring 22.5 by 34 metres, with eight layers above ground and an underground car park. Parking also occurs partly on the surrounding terrain and at ground level within the contours of the building. From front to back, the building is divided into three unequal strips. The foremost strip along the Zernikedreef contains the entrance, reception desk and a modest auditorium on the ground floor. Above these are the meeting rooms and offices, as well as the testing areas and a roof terrace with garden. The central strip is an amenity zone with toilets, two completely transparent lifts and two linked cascade staircases that also function as escape route. In the event of fire, the staircases are separated by a fire-resistant curtain that descends automatically. The strip at the rear contains the company restaurant with façades that can be opened for the most part and a generous void, a high-care zone, a research laboratory with a pharmacy connected to it, a dark room and various storage and freezing facilities. The top floor consists of sleeping quarters for long-term stays with a living room adjoining the roof garden. The loadbearing construction consists of a slender steel skeleton combined with hollow-core slab floors. The façades have been implemented fully flush; on the north side they are made completely of glass and on the other sides with a horizontal articulation of alternating strip windows equipped with sections that can be opened, and sandwich panels with a white enamelled glass exterior plate. A solar panel heats the boiler water, while for heating and cooling, the building is linked to a district heating system covering the entire business park, which in turn is connected to a geothermal heat storage system. For the CHDR design, use was made of an integral Building Information Model, which allowed the various consultants to tailor their design to each other well. Shortly after the building was taken into use, it won the Architecture Prize Leiden 2013. Recently, it ended up as second in the election of the best office building 2014, which was organized by the internet magazine for the highly educated Intermediair. ‘A great design, that supports a creative and multidisciplinary work method like no other building’, was one of the things the report about the election said.
Edit public page 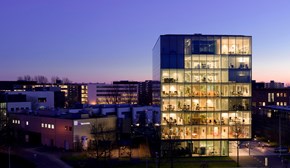