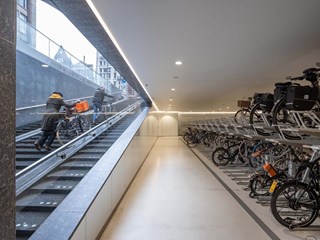 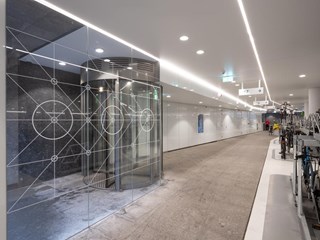 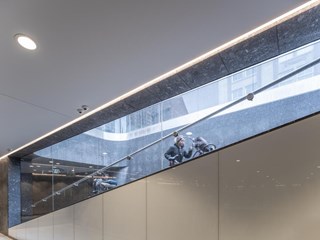 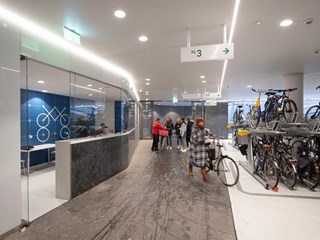 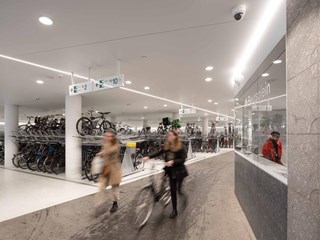 With the rapid rise of the popularity of the car in the 60’s, ‘Beursplein’, designed in 1898 as welcoming entrance to the Beurs van Berlage by architect H.P. Berlage, became a parking spot. Over the last decades the cars disappeared, and bikes took over. Thanks to the realization of an underground bike parking with space for 1700 bikes, the public space ‘Beursplein’ is given back to the City of Amsterdam.

The redesign of the ‘Beurs’ area and the bike parking are part of the Rode Loper project: the restructuring of the public space along the Noord/Zuidlijn. The Rode Loper which runs from Amsterdam Central station to the RAI Amsterdam Convention Centre is paved with dark grey natural stone. The bike parking is designed as an extension of this public domain; the entries, the stairs and the control room are covered with the same natural stone. Entering from the Damrak a slight curve guides bikers to the parking spots, a second (pedestrian)entrance connects the underground space with the adjacent Beurs and department store the Bijenkorf. The redesign of the ‘Beurs’ area harks back to the original design of Berlage; the drinking throughs for horses and the monumental lampposts are restored and placed back in their original positions. Also, the trees and benches are situated there where they were meant to be in the design of 1898

The use of natural stone and the luminous flow of daylight have given the bike parking a ‘cathedral’ quality. The architecture of the Beurs van Berlage contains many natural stone details, which inspired the design of the bike parking. The treatment of the stone is similar: the floor tiles have a rough, light grey surface, while the tiles, which are used on the wall, along the stairs are honed, which results in a smooth, almost black surface. The joints between the tiles are designed as a pattern of lines and circles, which can be recognized as a (deconstructed) bike.

VenhoevenCS believes that the cathedral quality and feel of the bike parking has a positive effect on the way people use and behave in the parking. 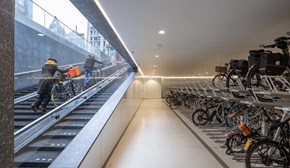