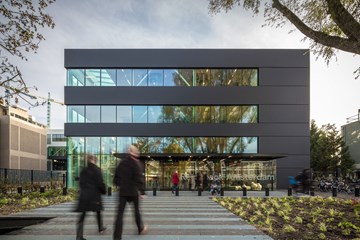 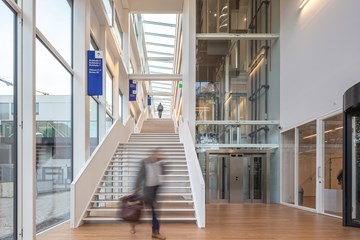 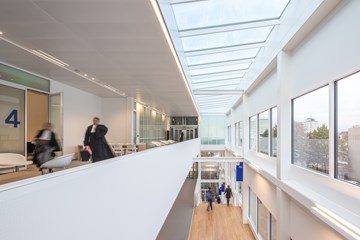 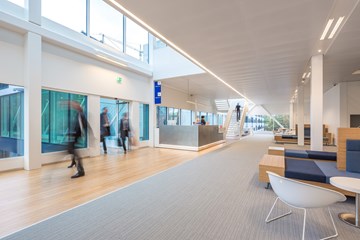 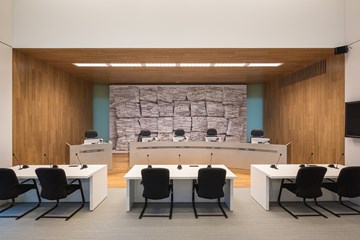 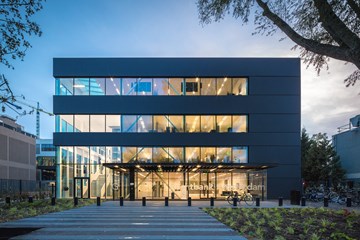 Recently Building G of the Amsterdam temporary courthouse was completed and taken into use. The interim-building is realized on the premises of the Parnas-complex on the Parnassusweg. Together with the existing towers E and F hereof, it forms the temporary courthouse as a whole. Over the coming five years, the larger part of the jurisdiction will take place in the new building. During this time, it also functions as the main entrance of the court complex. In the meantime the other existing buildings will be replaced by a new permanent housing. Building G was realized within a Design, Build, Maintain & Remove (DBMR)-assignment of the Central Government Real Estate Agency (Dutch abbreviation: RVB) by consortium DPCP, a combination of Du Prie bouw & ontwikkeling and developer cepezedprojects. cepezed and cepezedinterieur were responsible for the integral architectural and interior design. With this DBMR-project the RVB has specifically aimed at preventing waste and maximizing the building's residual value after its initial period of use. The building has therefore been designed with a well adaptable configuration, thus facilitating changing uses by changing users on changing locations in the future; the removal and the re-use are embedded in the contract. In order to render the structure as customizable and circular as possible, it was designed as a kit of parts that can as easily be assembled as disassembled and reassembled. For example, IMd engineers and cepezed developed a special mounting system for the hollow-core floors that optimally facilitates the later decoupling and re-use of the slabs. Also with regard to the joints of the steel construction, the possibilities for de- and have received special attention. The interim-character of the building does however not denigrate its quality, functionality or representativeness. Matters such as the equipment, the complex logistics, the acoustics, comfort, safety as well as the building's appearance all have the same high standard as in a permanent edifice. The temporary courthouse building shows a straightforward design with a restrained colour scheme and sophisticated detailing. The facades have an austere horizontal articulation of strip windows and dark tinted parapets with a cladding of stretched synthetic fabric. The building demonstrates an open, welcoming but also authoritative look and is somewhat set back from the public road with a green forecourt. It has a logical and clearly legible layout in which the traffic flows for public, court personal and indictees are strictly separated. The entrance portal provides access to the front hall and the reception desks. Along the east facade, a spacious stairway topped by a skylight leads to the waiting areas with adjoining court rooms on the second and third floor. The waiting areas have a clear and functional zoning with an open and light atmosphere. The court rooms have allure without being luxurious and entail a high level of serenity, clarity and daylight. The backdrops are decorated with photo-art by Marjan Teeuwen, who arranged debris of demolished buildings into almost abstract compositions. The courtrooms on the third floor have a double height and a public tribune.
Edit public page 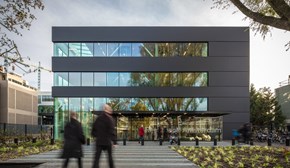