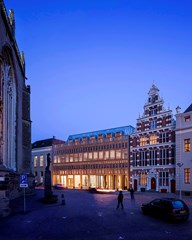 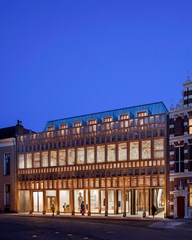 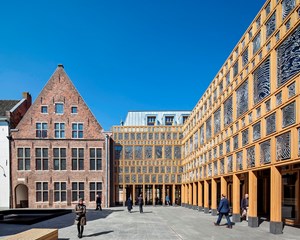 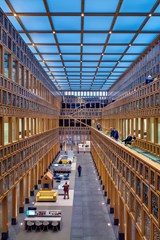 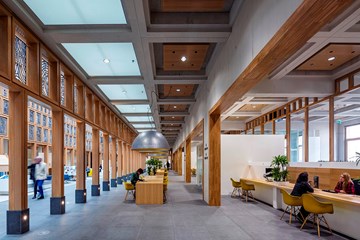 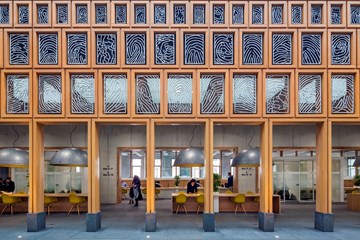 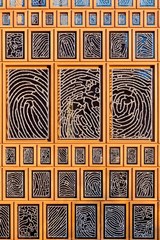 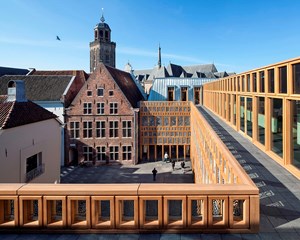 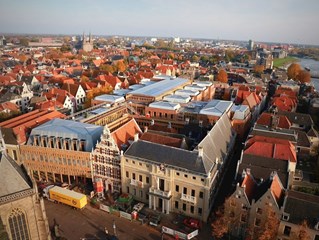 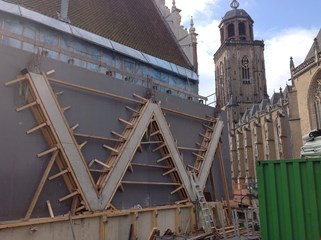 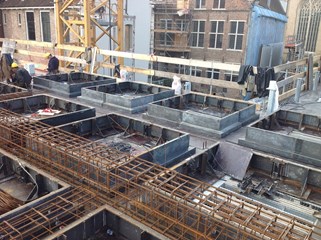 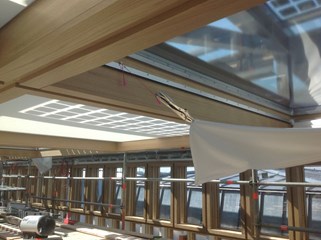 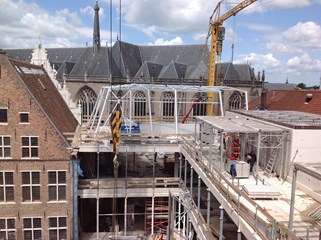 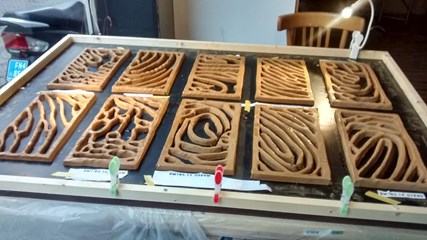 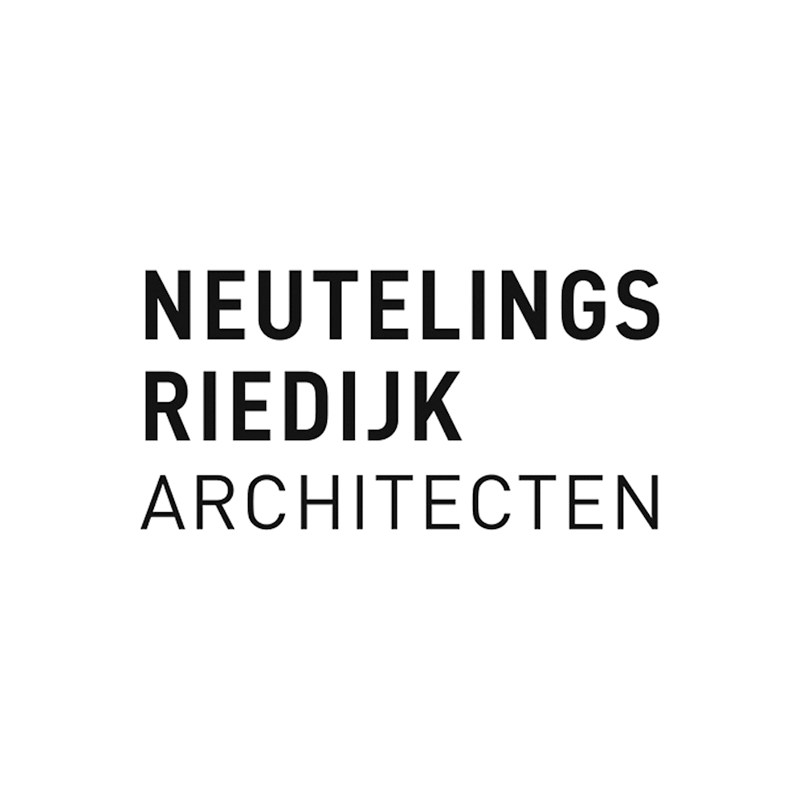 The new city hall in Deventer unites the old historical city hall with a new city office. The new building complex is located at the ‘Grote Kerkhof’ and extends as far as the ‘Burseplein’. The 24.000 m2 large project consists of 20.000 m2 new buildings and 4.000 m2 renovation and restoration of existing listed monuments. The project consists of an entrance building with a main building behind it and unites all of Deventer’s employees, formerly divided over the city, under one new roof. It houses the city council and all municipal services and invigorates a formerly forgotten part of the inner city. The City Hall’s design seamlessly blends in with Deventer’s typical urban tradition of gardens and squares that are interconnected via alleys, lanes, pathways and gates. The building is organized around two new public squares: an open court surrounding the former mayor’s residence and a covered inner square; the building’s central hall where citizens, visitors and employees can meet one another. Adjacent to the office buildings in the Polstraat and Assenstraat two large city gardens are situated next to the neighbouring residential buildings. Open filigree wooden frames and closed brick volumes alternate within the facades. The stone facades consist of large block masonry with protruding window frames. The bricks are multi-coloured creating a lively image. The filigree facades consist of a grid of different sized oak wood frames. The oak framework provides space to integrate contemporary art in the building’s architecture. In collaboration with local artist Loes ten Anscher a series of aluminium grids was designed to fit within the oak framework, containing 2.264 unique fingerprints of 2.264 different citizens of Deventer. Spread out over the outer and inner facades of the building they form one large work of art. The visible presence of Deventer citizens in the facade turns the city hall into a true ‘Citizen House’

Closed bricks and open elements alternate in the buildings’ façades. In cooperation with the contractor, the Timmerfabriek and the Stichting Keuringsbureau Hout (SKH, a wood certification company), ABT worked to optimise the detailing on the oak frames, as well as the adhesive bonds in the joinery and protection against weathering. In order to qualify for SKH certification, the maximum dimensions of any individual piece of wood are 220x90 mm. As a result, ABT devised a hybrid solution for engineering the façade: oak panels with hidden steel components, combined in modular fashion to support the architectural design. Solar protection is provided by welded screens depicting the fingerprints of Deventer residents. ABT devised a solution to allow these screens to be attached while preventing falls and still allowing hinged movement: a simple aluminium strip. It is a textbook example of ‘back to basics’ – a simple, affordable, functional and aesthetically-pleasing solution that also takes the building tolerances and differing dimensions into account. The Ten Anscher team – the foundry worker, welder and contractor – made a major contribution by working with extreme precision and demonstrating unwavering commitment to the method of implementation assigned by ABT. The complex encompasses three buildings of significant historical value. Four thousand square metres of national monument have been renovated and restored. ABT has maintained short lines of communication with the relevant authorities, working together to conduct regular joint inspections. The integration of new with old has been designed to be both respectful and contemporary, allowing past and present to enhance one another in the new Stadhuiskwartier. As design manager representing the client, ABT was responsible for ensuring that the 11 sub-projects complied substantively with the aesthetic, technical and financial parameters of the brief. Pro-active efforts were made to involve the remaining members of the project team in this process. The design manager served as a lynchpin between the various parties involved in the execution, which allowed the contract manager to concentrate fully on ensuring compliance with the contractual obligations. The design and contract managers were responsible for supervising the designers, advisers and contractor(s); together with the client, they formed a ‘triad’ at the hub connecting the construction with the user, the municipality of Deventer

The Deventer City Hall is one the most sustainable public/government buildings in the Netherlands. Thanks to a clever design with tall spaces, vast amounts of daylight and air, optimized use of as many natural sources as possible, the implementation of green and multiple technical sustainable measures. The great amount of windows, roof lights and high ceilings allow natural light to enter the building everywhere, creating an agreeable working environment and simultaneously lowering the electricity consumption. The exposed concrete inside the building contributes to a high-quality, comfortable indoor environment: the concrete stores warmth or cold in various seasons. Concrete core conditioning is also used. The shed roof construction in the public hall prevents direct sunlight from entering and overheating the building. Ventilation ducts and grids in the windows and floors let fresh air seep into the building. By transporting this heated air out of the building via the atrium, surplus heat is used in an efficient way. The use of sunlight, rainwater and water from the IJssel river (for cooling and heating) increases the building’s sustainability with 25% as opposed to similar offices in the Netherlands. The City Hall received the Dutch sustainable GPR score of 8 to 9 as well as the international qualification BREEAM ‘Excellent’.
Edit public page 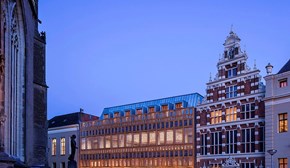